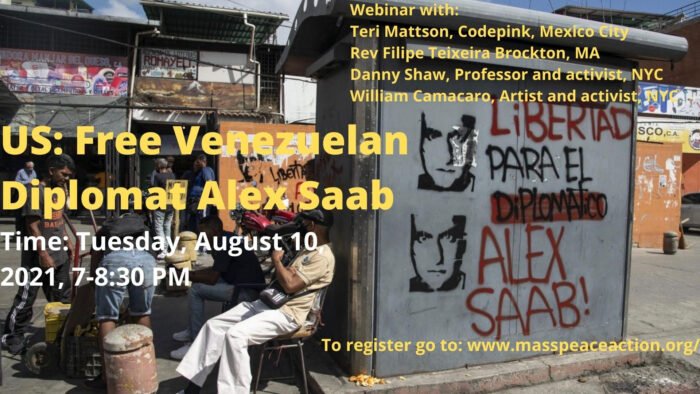 Alex Saab is a Venezuelan diplomat who was arrested on June 12, 2020, on the orders of the US government, while his plane was on a refueling stop in Cape Verde. He was forcibly removed from the plane, imprisoned, and held under torturous conditions. A year later, Saab, remains illegally imprisoned and is fighting extradition to the US. He was on his way to Iran on an official visit in search of food, medicine, and gasoline to alleviate a crisis in Venezuela resulting from a regime of extra-territorial and illegal sanctions imposed by the US government. In return for arresting Mr. Saab, the US will reward Cape Verde by building a new $400 million embassy, adjacent to the Government Palace in Praia, the capital city of Cape Verde. Register for this webinar to hear a report about a recent delegation of community leaders from the US who went to Cape Verde to visit Mr. Alex Saab, as well as learning about current conditions in Venezuela. You’ll get the recording afterwards if you’re not able to tune in tonight.

What you can do to help prevent Alex Saab’s extradition, and demand his freedom: